Technologies Transforming Life in Our World and Beyond

Life as we know from the 90's and at the turn of the millennium has completely transformed through advancements in game changing technology. And there is a lot more to change within the next five years. If a person who went to sleep in the 90's wakes up now our world will feel like another world. Ease of living and facilities are unimaginably bigger, better and faster than ever before. Improved accessibility and efficiencies is reaching education, agriculture, energy, banking, health and lifestyles.

Technologies currently making an impact on our lives today and that will transform our world and the way we live completely within a short five years away follows in a very likely scenario. 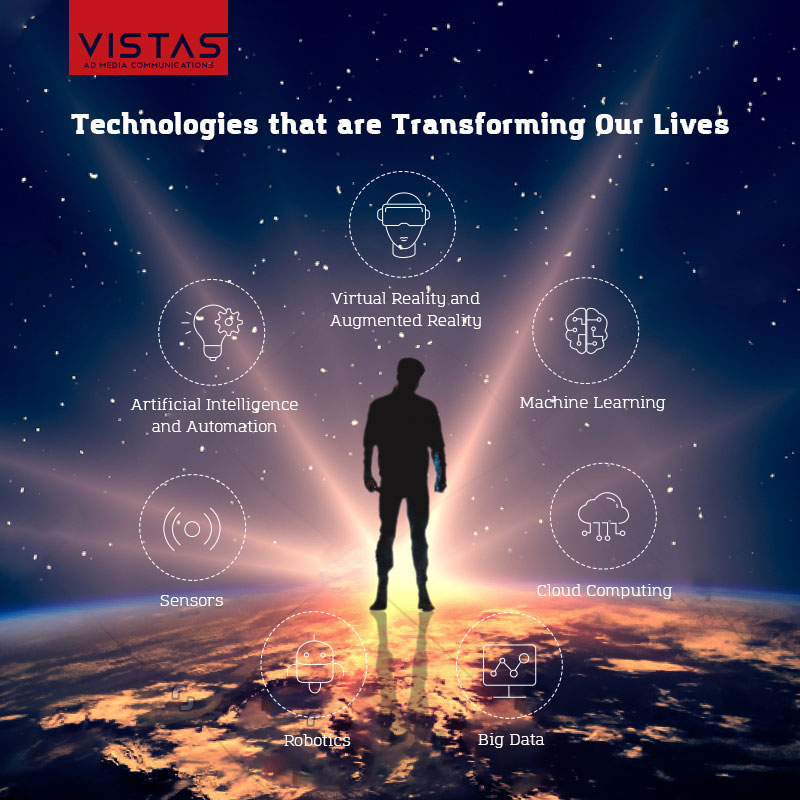 The importance of big data analytics

The internet of things or IoT, is a structured system of interrelated computing devices, mechanical and digital machines, objects, animals or people that are provided with unique identifiers or UID's and the ability to transfer data over a network without requiring human-to-human or human-to-computer interaction.

IoT is an invisible network made from physical objects around us and embedded with smart sensors and connected to the internet. The sensors are designed to collect and exchange data with other smart objects and services such as doctors and insurance providers.

With smart sensors at home and in the car, lights go off when you leave home and turn back on automatically on your return. Control your household gadgets from any location, even overseas. Your car senses your presence and unlocks doors and ignite the engine by just touching the steering wheel.

Refrigerators manage food supply and replenishes the stock on time. This year, we see a huge influx of data sensors and more specifically an increasing push for standardization of sensors so that we can actually start enjoying a fully connected and cohesive supply chain.

IOT is not widely prevalent yet as associated technologies aren't fully developed yet. Emerging development in 5G, the cloud, edge computing, block-chain will make IoT faster, safer and more effective.

The process of learning includes:

Strong AI or artificial general intelligence, is an AI system built with generalized human cognitive abilities. When presented with an unfamiliar task, a strong AI system is designed to find a solution without human assistance or intervention.

AI tools present new functionalities for businesses, however, the use of artificial intelligence also raises ethical questions. As deep learning algorithms, underpin many advanced AI tools and are only as smart as the data they are given in training. Because a human selects the data used for training an AI program, the potential for human bias is inherent and must be monitored closely.

A section of the industry believe the term artificial intelligence is closely linked to popular culture, causing unrealistic fears among general public on artificial intelligence and implausible ideas on the changes AI will cause in the workplace and life in general. Augmented intelligence is a term favored by the industry for a more neutral connotation and to communicate that AI will simply assist in improving products and services, not replace the humans that use them.

Robotic machines increasingly carry out complex series of actions accurately and tirelessly as instructed. Robots have replaced humans in performing repetitive and dangerous tasks which humans prefer not to do, or are unable to do because of size limitations, or which take place in extreme environments such as outer space or the bottom of the sea. There are concerns about the increasing use of robots and their role in society. Robots are blamed for rising technological unemployment as they replace workers in increasing numbers of functions. The use of robots in military combat raises ethical concerns. The possibilities of robot autonomy and potential repercussions have been addressed in fiction and may be a realistic concern in the future.

Robots can be guided by an external control device or the control may be embedded within. Robots may be constructed on the lines of human form, but most robots are machines designed to perform a task with no regard to how they look. Robots are built with sensors, control systems, manipulators, power supplies and software all working together to perform a task.Design, construct, program and testing of robots is a combination of physics, mechanical engineering, electrical engineering, structural engineering, mathematics and computing. In some cases biology, medicine, chemistry might also be involved.

A robot has these essential characteristics:

Some robots like the Mars Rover Sojourner and the upcoming Mars Exploration rover, or the underwater robot Caribou help us learn about places that are too dangerous for us to go. While other types of robots are just plain fun for kids of all ages. Popular toys such as Teckno, Polly or AIBO ERS-220 seem to hit the store shelves every year around Christmas time.

Augmented Reality is the enhanced version of reality. Live direct or indirect views of physical real-world environments are augmented with superimposed computer-generated images over a user's view of the real-world, thus enhancing one's current perception of reality.

Augmented reality presents an enhanced perception of the real world. Augmented elements such as sensors and computers enhances reality for a superior experience.

AR is seen as one of the emerging technologies that will reshape the way we interact with the physical world around us. Companies like Google, Facebook and META are looking to capitalize on the AR market.

AR technology is sought after from social media channels to surgical procedures as it brings elements of the virtual world, into our real world, thereby enhancing the things we see, hear, and feel. In comparison to other reality technologies, augmented reality lies in the middle of the mixed reality spectrum; between the real world and the virtual world.

Augmented reality has many different implementation models and applications, but its primary objective is to provide a rich audio visual experience. AR works by employing computerized simulation and techniques such as image and speech recognition, animation, head-mounted and hand-held devices and powered display environments to add a virtual display on top of real images and surroundings.

A nano-meter is one millionth of a millimeter - approximately 100,000 times smaller than the diameter of a human hair.

Nano-sized particles exist in nature and can be created from a variety of products, such as carbon or minerals like silver, but nano-materials by definition must have at least one dimension that is less than approximately 100 nano-meters.

Most nano-scale materials are too small to be seen with the naked eye and even with conventional lab microscopes.

Materials engineered to such a small scale are often referred to as engineered nano-materials (ENMs), which can take on unique optical, magnetic, electrical, and other properties. These emergent properties have the potential for great impacts in electronics, medicine, and other fields. For example:

Nano-materials are layers of particles arranged in components at a nano-scale level or measurements of under 100nm. By their structure nano-materials have greater relative surface area than any other materials, higher strength and reactivity with other materials. The quantum properties of nano-materials affect the electrical, magnetic and optical performances of the target objects.

With all of these innovations, technology has made our lives easier, faster, better… and more fun than ever before. The near future is even more interesting. We are poised in making driver-less cars ubiquitous and robots taking over all menial and repetitive tasks.